For the love of her 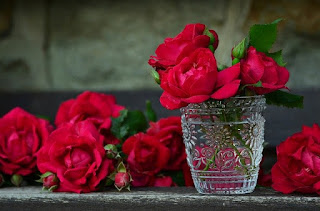 Felicity climbed carefully into the trap and sat down, smoothing out her long skirts. She smiled as she placed the wicker basket beside her. Toys and treats for her Nephews and Nieces. She shook the reins and clicked the pony on. She hadn't seen her sister for a few weeks, and her time was drawing near, so Felicity wanted to check that Mother and baby were well and happy. Not that she should worry, as Elizabeth's husband Leo absolutely doted on her.

Until a few weeks ago, Leo had been working as a manager in a bank, so they weren't short on money – just as well with all of those children! But unfortunately things had changed and he had lost his job. It was such bad timing, what with another baby due any day.

She thought about her sister. Despite her disability, she was well and happy, and loved. It had happened nearly thirteen years ago now, shortly after she and Leo had been married. A horse riding accident! Her back had been broken and had paralysed her from the chest down. Leo had stood by her, taking care of her every need.

When Elizabeth's nurse had a day off, it was Leo who bathed her, changed her bed and brushed her hair.

Each day he would lift her tenderly, carefully carry her downstairs, lower her into her bath chair and wheel her around their immaculate gardens.

They found great comfort in being together, for they were so much in love. Which of course, led to many babies.

Elizabeth found birthing babies easy. She couldn't feel her pains when her time came, and everything had always gone easily and smoothly, with the babies arriving happy and healthy.

Apart from little Martha. She had been born long before her time and did not survive. Elizabeth had cradled the infant for the few days that she had lived, giving her warmth and love until she passed away peacefully in her arms.

The pony trotted on, until they finally reached the large town house. Felicity drew the pony to a stop outside and waited for the groom to take it to the stables for a rest and some food. She looked around. Strange, there was no sign of him. Shrugging, she released the pony from his harness and led him to the stable herself.

Slowly, she walked back to the front door, noticing that the flower beds were not as tidy as usual. She looked around. No sign of the gardener either. How very strange!

She rang the doorbell, listening to it jangling brightly somewhere deep within the large house. The cries of excited children came to her ears, making her smile. Here they come, the tribe, she thought to herself. The door opened, and there stood Leo, a child in his arms and several more gathered around him.

'Felicity,' He said quietly, 'This is a surprise, I had no word that you would be visiting today!' She smiled up at him. 'No, I thought I'd surprise you all and see how Elizabeth is doing as the new baby is due any day.'

'Well come on in' said Leo, standing aside to let her pass. She noticed that he looked haggard, older, tired. 'How are you Leo? Are there any new jobs on the horizon?' He raked his fingers through his hair. They were shaking. 'No, not yet, but things are looking promising.' He replied. 'Come on in.'

She stepped into the house and looked around. Dust lay in a fine film over the surfaces, things weren't tidy as they usually were. 'Leo, I think you need a new maid!' She said jokingly. 'Ah yes,' he replied. 'She's looking after her Mother at the moment, she's been taken ill with a fever!'

Felicity walked into the parlour, surrounded by the children, who were eager to see what treasures were in the basket for them. She laughed. 'Alright, alright, let me take off my hat and coat off first and then we shall see what I have for your all.'

She walked over to the coat stand, and hung her things upon it. She caught a smell, faint, but it was there. 'Leo,' she said, 'What is that strange smell? It is almost like rotting meat. Maybe cook has left something too long?' 'Yes, maybe so,' said Leo looking away.

Felicity sat on on a chair, smiling at the children. 'My goodness, how many of you are there now?' She asked. 'Eight!' replied Jane, who was the eldest. 'Soon there will be nine because Mamma will have a little baby soon!'

'And how is your Mamma?' Felicity asked. Jane's face fell and she began to sob quietly. 'Mamma is not feeling well. Daddy says she is sleeping. We haven't seen her for a week!'

Felicity looked at Leo. 'Is this true?' She demanded. 'Elizabeth would never refuse to see her children, she dotes on them! What is wrong?'

Leo looked away and muttered 'She's just tired, that's all!'

Felicity felt an odd stirring within her. Something was very wrong here!

Little Paul tugged at his Father's sleeve. 'Papa, I'm hungry,' he wailed. 'I'll take him down to the kitchen, if you like, and see if cook can find him something.' Felicity suggested.

'No! Snapped Leo, 'I'll take him!' She looked at him in surprise! Never before had he been so short with her. He had always been very polite and caring!

He stalked out of the room with Paul, some of the other children joined him, pleading hunger too.

Felicity looked around. The other children were happily playing with their toys. I'll just go and pop in on Elizabeth while everyone is busy. If she is sleeping, I'll let her be, she thought.

She left the room and went upstairs to Elizabeth's bedroom. She pushed open the door quietly, so that she would not wake her sister if she was sleeping.

There's that smell again! Perhaps Elizabeth's bed needed changing, as it often did. She tiptoed across to the bed and looked down at her sister's face. It was so pale! She reached out and stroked her face and recoiled in horror! Elizabeth was cold. Stone cold! How could this be? Felicity looked down, taking in her sister's serene face and the bulge of her belly, with her unborn child within.

The door behind her opened and Leo walked in. 'Please don't wake her,' He said. Felicity's mind somersaulted. 'Leo, what's happened here, call the doctor, please Elizabeth is dead!' Leo smiled. 'No, she's not dead, just sleeping. She's been sleeping for a week now. I've been bathing her, brushing her hair, making sure that she is comfortable.

One morning, on the nurses day off, I came in to see her, as usual. There was blood, so much blood and she was sleeping. I cleaned her up, thinking that the baby was coming, but it didn't and she slept on.

He sat by the bed, taking Elizabeth's hand in his own. 'My love, He said. 'Once you wake, I will bring the children to you, they are missing you so much my darling. Please wake up soon, we all miss your laughter and smiles.'

I sat down, tears filling my eyes, looking across at Leo, who loved Elizabeth so very much. So very much that he could not bear to be without her, ever.

After a while, I stood, crossed the room and went back downstairs. The children all turned their happy faces towards me. How could I tell them. How could I possibly tell them. But I had to! Someone had to.

Leo came downstairs and looked around at his crying children. 'Its alright, its alright,' He said, kissing them one by one. Mamma is just sleeping, she'll be fine soon.

Tears once more filled my eyes as I turned and left the house. I had to get the Doctor. He would know what to do! I put pony back into his harness, climbed into the trap and set off.

Email ThisBlogThis!Share to TwitterShare to FacebookShare to Pinterest
Labels: For the love of her, Serendipity says, short story
Older Posts Home
Subscribe to: Posts (Atom)