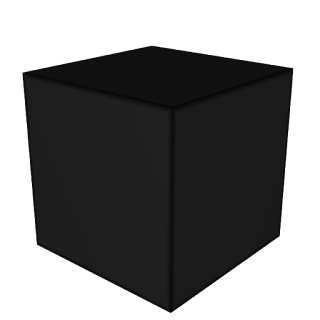 'Ah, this is the life', said Zack, stretching his arm across Carly's shoulder as they sat on the sofa.

Never in their wildest dreams did they expect to be living the high life – literally. Zack had landed a high powered job and the penthouse flat in the skyscraper in the city had seemed the perfect place for them. The stunning views of the city and the sea beyond through the large window, were just to die for!

'Fancy a cuppa?' Asked Zack, standing up and stretching. He turned towards the kitchen, glancing through the window at the view. 'What the hell,' he cried 'Is that!!!'

Carly turned, looking at Zack quizzically. He was staring, pointing out of the window. Her gaze switched to the window and her eyes opened wide in fear and amazement!

Together they walked to the window and looked out at the city. There, suspended in the air was a glittering black cube. Huge, and ominous. They stared. 'What is it?' Whispered Carly, terrified of what she was seeing. 'I have no idea', replied Zack, shaking his head in confusion.

'You don't think it could be, like, aliens, do you?' Said Carly quietly. Zack turned to her and laughed. 'Don't be silly. If it was an alien invasion, the army would be out there, shooting them down. It's probably some publicity stunt or something.'

'I've got to get this on film', said Zack running through to the bedroom to find his camcorder. He came back, camcorder in one hand, tripod in the other. 'I want to watch this', he said, so I'm going to set the camera going on the tripod, then I won't get distracted.'

He set up the camcorder peering through the viewfinder to get just the right angle. Yes, yes, that's right. I can see the cube in the sky, above the city and I can see us watching it. Perfect shot.

He ran back to Carly, and they stood, watching the mysterious cube. Zack shivered. 'Are you cold?' asked Carly. 'No, I don't know, I just felt a bit weird there.' 'I know what you mean', she replied, I feel a little weird myself.' She smiled weakly at Zack and held his hand tightly.

They stood, unmoving, losing track of time, as the cube continued to hover, sparkling as the sun glinted off of its surface.

Without warning, the cube blinked out of existence. Zack and Carly, startled, turned to look at each other. 'Well that was a bit weird', said Zack. How could it just wink out like that? It doesn't make sense!'

'I'm going to go and put the kettle on and make something to eat', Said Carly. I feel really hungry and thirsty for some reason!

She headed towards the kitchen, shaking her head, trying to shake the odd muzziness from it. 'Zack! The clock! This can't be right, it says its three o'clock. How can that be so? We started watching the cube at eleven! Maybe the batteries are gone. We were only watching it for about half an hour, surely?'

Zack looked at his watch. 'Carly', he said slowly, my watch says its three as well!'

They looked at each other, scared and confused, not understanding what had happened, why they had lost nearly four hours of the day.

'Let's see what the camera says' Said Zack, crossing the room and flipping out the screen. 'Yep, it has been recording for four hours! This is just so bizarre.

They plugged the camcorder into the TV and sat down to watch the footage. For a while, it was just them, the cube and the view. Nothing more. Zack fast forwarded the film, watching for the moment that the cube disappeared, hoping he could catch the exact frame.

Suddenly Carly screamed! There on the screen something had winked into existence inside the room – two somethings!

Two beings, grey, with strangely large heads, angled forward on their skinny bodies. Long, spindly arms reached out, one towards Carly, one towards Zack. Why hadn't the seen them, why hadn't they felt them. This just couldn't be happening.

The creatures talked with each other, in a series of clicks, their heads tilting as they did. They touched the couple, measuring and observing. On the screen, Zack and Carly stood motionless, in some sort of stupor, totally unaware of what was happening.

The creatures injected the couple in their necks, took some blood, watched them, looking into ears, eyes and mouth. Talking to each other, as though they were comparing notes.

One of them stopped! Its head snapped around, it had heard something! It turned and spoke to the other. Both turned and looked at the camera, a look of absolute anger on their reptilian faces. And disappeared!

On the screen, Carly and Zack moved sluggishly, as though they were sleepwalkers. Slowly they turned to look at each other, and then out of the window again. The cube had gone! They appeared to snap awake suddenly.

'Well that was a bit weird', said Zack. How could it just wink out like that? It doesn't make sense!'

Carly and Zack sat on the sofa in silence, watching, not believing what they had just seen. Zack rubbed his neck, thinking that it must have all been a dream, that it could not just have happened.

'Zack, your neck!' exclaimed Carly. There, just where he had been idly rubbing, was a small, red puncture mark! He glanced at Carly's neck. Yes, she had one too, just where the creatures on the screen had injected them.

They looked at each other in horror as the truth of what had just happened became clear!

Posted by Serendipity at 10:58